St. Joseph’s College, Visakhapatnam, invited Dr. Annie to give a programme to the students in order to heighten their awareness of certain issues regarding menstruation and the female reproductive system .They were reminded that menstruation is a natural process that first occurs in young girls usually between the age of 11 and 14 years and is one of the indicators of the onset of puberty.

Despite being a phenomenon unique to girls, this has always been surrounded by secrecy and myths in many societies. Taboos surrounding menstruation exclude women and girls from many aspects of social and cultural life. Some of these are helpful, but others have potentially harmful implications. In India even mere mention of the topic has been a taboo in the past and even to this day, cultural and social influences appear to be a hurdle for the advancement of knowledge on the subject. Culturally in many parts of India, menstruation is still considered to be dirty and impure.

Myths in India relating to Menstruation:

Impact of these myths on women and young girls:

The students learned that there are health and hygiene issues also to consider relating to girls and menstruation. Over 77% of menstruating girls and women in India use an old cloth, which is often reused. Further, 88% of women in India sometimes resort to using ashes, newspapers, dried leaves and husk sand to aid absorption. Poor protection and inadequate washing facilities may increase susceptibility to infection, with the odour of menstrual blood putting girls at risk of being stigmatized. The latter may have significant implications for their mental health. The challenge, of addressing the socio-cultural taboos and beliefs in menstruation, is further compounded by the fact the girls’ knowledge levels and understandings of puberty, menstruation, and reproductive health are very low.

During the session health tips were given and low-cost sanitary napkins were distributed and the girls were instructed what care they should take for themselves. They felt that they had been given more awareness about the myths and howthey are affecting lives 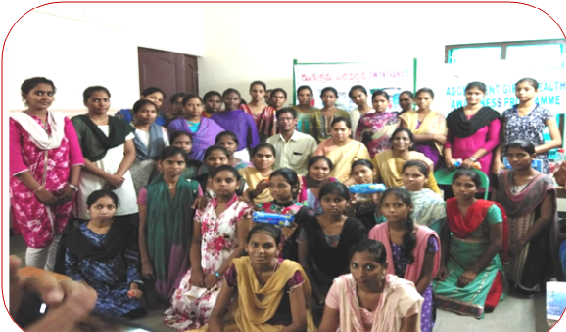