A few observations at the start of this 3rd year, marking the presence of the Sisters of St Joseph of Annecy.

Three successive wars and conflicts had paralysed the country. (1993 to 1999)

Consequently, everything had to be reconstructed. Destruction at every level weighed very heavily on the organisation and the loss of human life was immense.

Some people returned from the forest, where they had taken shelter, and began to rebuild their houses and families. People were less fearful. Many bought land close to the Sisters.

“Peace” was the word, the wish and the prayer on everyone’s lips. It is still fragile and constantly threatened.

Yaka Yaka is an enclosed environment.

The local people earn their living as farmers, craftsmen and cattle breeders.

People, not long since scattered by the war, returned to rebuild their villages, but others went towards the Town where there was chronic unemployment. Living conditions were difficult and did not favour an orderly and effective development. Each one tried to manage with the minimum. The courage of these men and women was admirable.

Primary education was now available for everyone, the little children spoke French, all thanks to the great efforts made by the Church and Religious Congregations.

In the year 2000, Bishop Milandou made a request: “Do all you can to protect the family and the schools”. Family stability was weak. We recognise in this domain, potential and urgent work to be done with the help of our Associates.

There is still much poverty and serious exploitation of young girls and women: prostitution is common and we can only help through education and the protection of girls, by restoring people’s dignity and by helping them to have a personal identity, by seeking to cultivate a sense of human values: an urgent task which awaits us.

Many children are abandoned. Here again, care must be taken of the girls to reduce this problem. People of good will, like Mama Hélène, devote themselves to this. God raises up Mothers Teresa everywhere!

For people who are sick, catholic dispensaries offer care and follow-up treatment at a reasonable price. The huge question of prevention remains. Sister Tessy collaborates with other Religious involved in providing care. In this regard also, there is potential for work. The provision of care by the Sisters is in great demand. People go long distances to avail of it.

Justice and Peace is organised at Brazzaville, for example, by the AFRIKA TELEMA (Africa standing) Foundation, of which Sr Agnes is a member. It concerns itself with justice and peace, so essential for the development of Africa.

The Christian Life: what is striking is the degree of presence in the Parishes and Churches. The Liturgy is very lively, and even the weekday Masses are sung. People go to work after the 6am or 6.30 am Mass. Several Associations exist, each group having its own particular style: the women wear a coloured headscarf and sometimes, the men wear a scarf. They come together in a group to pray. At St Peter Claver Church, there could be as many as six groups gathered outside, waiting for the 6pm Mass. Others are at Exposition and Adoration of the Blessed Sacrament, almost morning and evening each day. Witnessing to their faith is essential, as Christians form only 8% of the population.

How to remain salt of the earth?

Forum for Consecrated Life: It is the first such forum in the Congo! It invites us, during this year of Consecrated Life, to prepare for the start of the year on February, 2nd. For three days, Major Superiors and Delegates have been preparing for it. Their work consisted in re-reading the stages of the history of Religious Life in the Congo. Particular attention was given to its development since the Council, with emphasis on the planting of missionary charisms in the Congo, as well as the establishment of indigenous Foundations. Everyone was invited, men and women Religious, Christian Communities, and members of our families, for the purpose of re-energising the Consecrated Life by the authenticity of our lives, by fidelity to our commitments to a simple and poor life, in a surge of renewed zeal for the new evangelisation and attention to the poor.

Call to look back over the past with GRATITUDE, to live the present with PASSION and to approach the future with HOPE.

At the celebration of the closing Mass, the diversity of the rainbow was presented in a special way. Young people were there in great numbers, from Carmelites and Visitandines to Oblates (consecrated widows), on to about thirty apostolic Congregations, in dress of every colour.

To men and women, Yesterday’s and today’

We can render a vibrant hommage

And we know that: 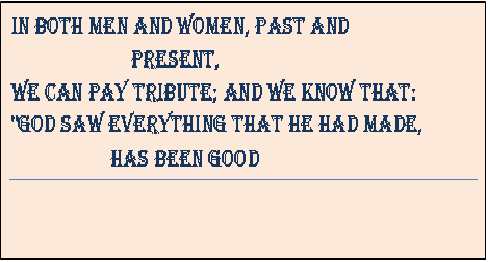 “God saw all that He had made,

and found it very good”

At Yaka Yaka , a beautiful house is awaitng us. The finishing touches are in line with the rhythm of the country! We are looking for solutions to the lack of water and electricity.

We hope to have it sorted in a month’s time. We are awaiting Sister Tessy with hope, so as to be better able to respond to calls, and immerse ourselves fully in this new area of apostolate. We continue to count on you. It is your Mission! Thank you for your presence and the support of your prayers.

“The Little Design” is taking root in Congo Brazzaville,

and we hope that God sees that it is very good! 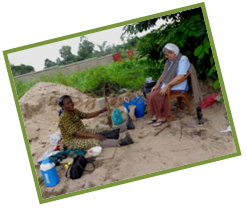 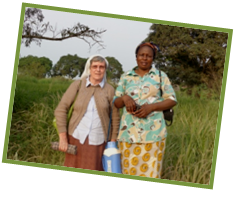