Jesus Calls each one of us, come and see. ’’You did not choose me but I chose you.” 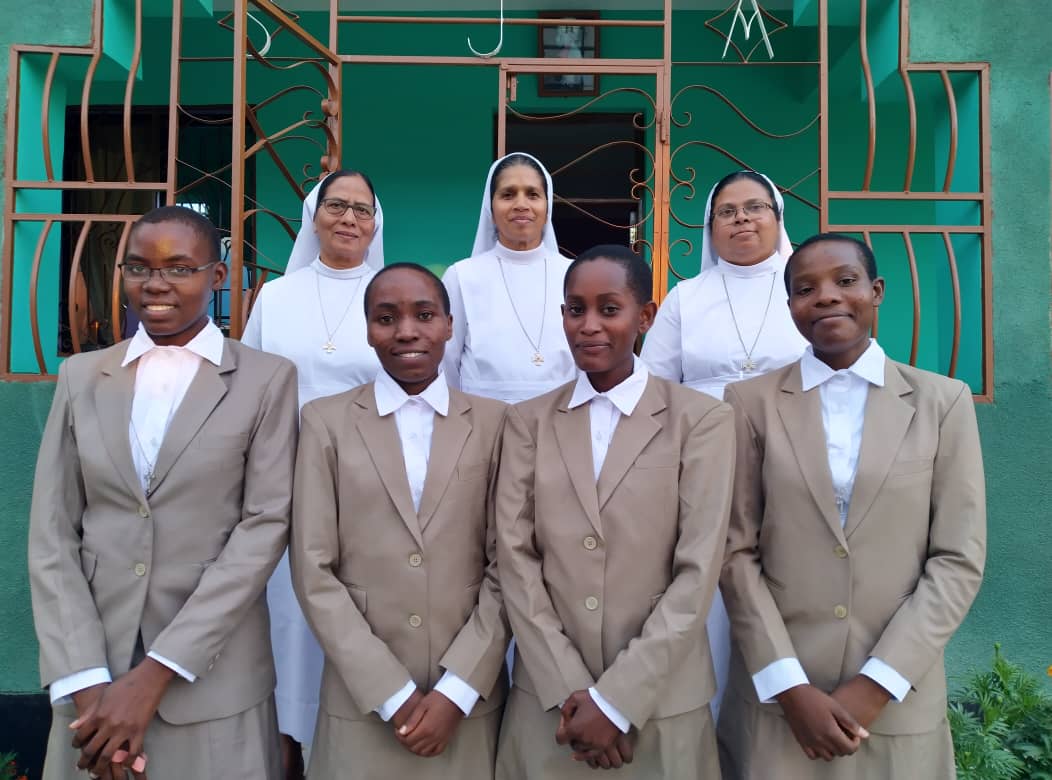 On 14th June 2022, came the auspicious moment, the ceremony of Initiation of the Pre-novices to the Novitiate, commenced at 4.30pm in the Amani house, Novitiate Chapel, Chemba. Our Mission Leader Sr.Marietta, Sr,Sunita the Novice Mistress and Sr.Margrate Mary, the Pre-Novice mistress, Fr.V.Shirima,sj the retreat director of the Novices and the Sisters of Chemba community were present for this occasion.

The Initiation ceremony began with a prayer invoking the Triune God to bless our Formees especially as they have set their feet into the journey of Faith. As Novitiate is a time to grow in strong faith in God and to be convinced of His love. So that as they begin to assimilate all that they are going to learn to be a Sister of SSSA, they are to allow themselves to be led by the Holy Spirit to guide them and lead them to reach their goal. 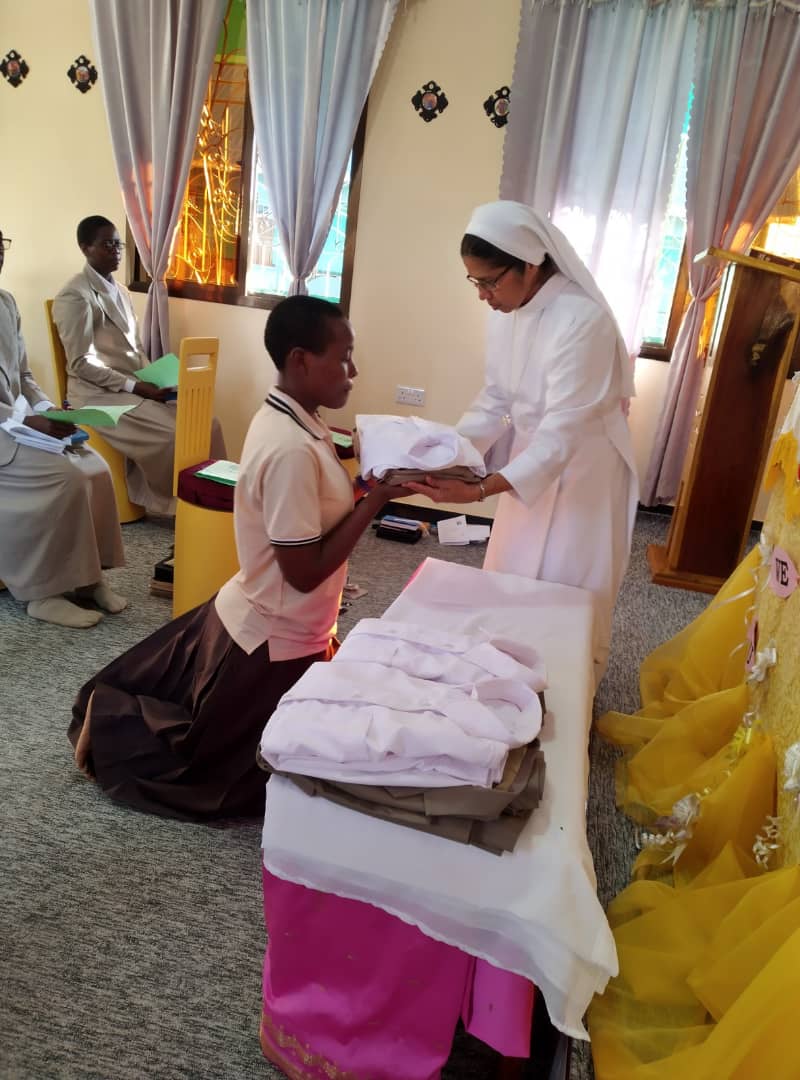 Our Mission Leader Sr.Marietta handed the Pre Novices our Constitutions, Uniform, the chain with the Crucifix. After that our Mission Leader was invited to give a short message to our Novices.

The Pre-Novices were offered lighted candle by Sr.Sunita, as a sign of welcoming them to the Novitiate, after which they surrendered themselves to the Lord by placing their candles on the Altar, praying for the grace to be docile to the inspirations of the Holy Spirit. 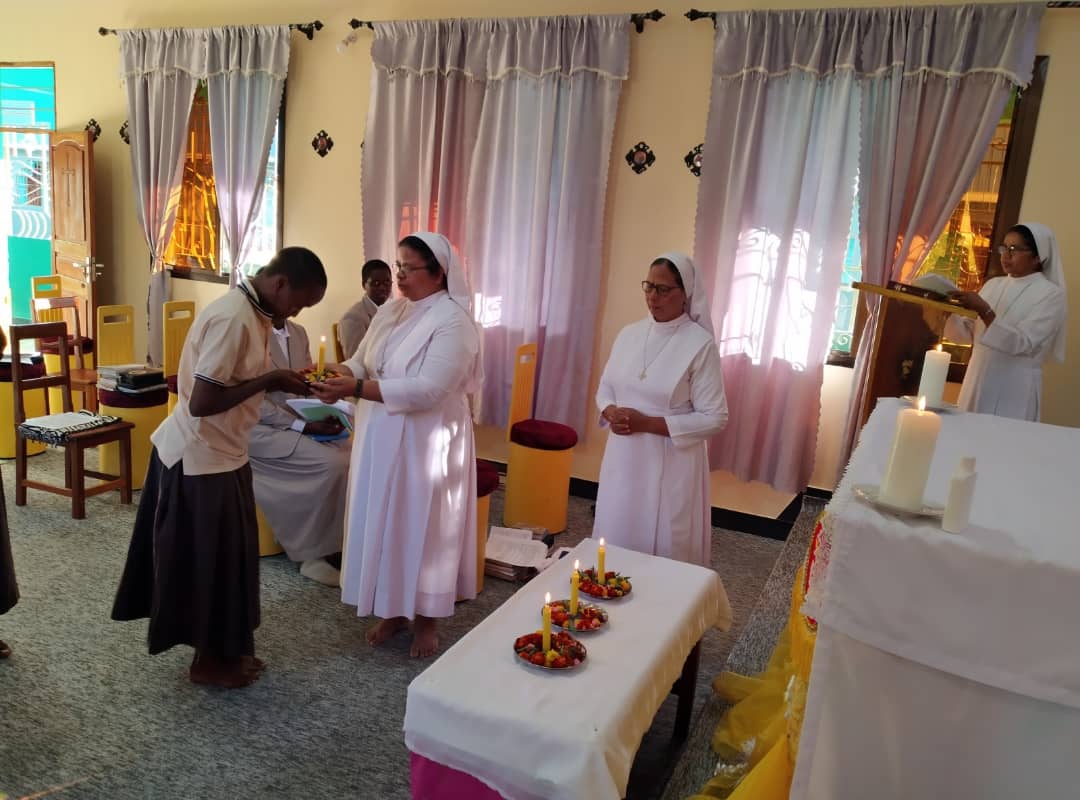 All the sisters prayed for them and entrusted them to the care of St.Joseph our Holy Patron by singing a hymn to St.Joseph, All the Novices together sang the Magnificat. The prayer of Intercessions were prayed by novices. The entire Para-liturgical service evoked enthusiasm and joy.The gathering dispersed for tea break. After the solemn ceremony, the assembly gathered in the Novitiate dining room to greet the new novices.

Our heartfelt thanks to Our General Team especially to Sr.Breda, our Superior General for accepting our Pre-Novices, Donisia, Benita, Glory and Antia and the Novices Guandencia, Sylivia, Angela and Filomena to begin and continue their Formation. Kindly pray for their perseverance. Thank you.               Sr.Sunita 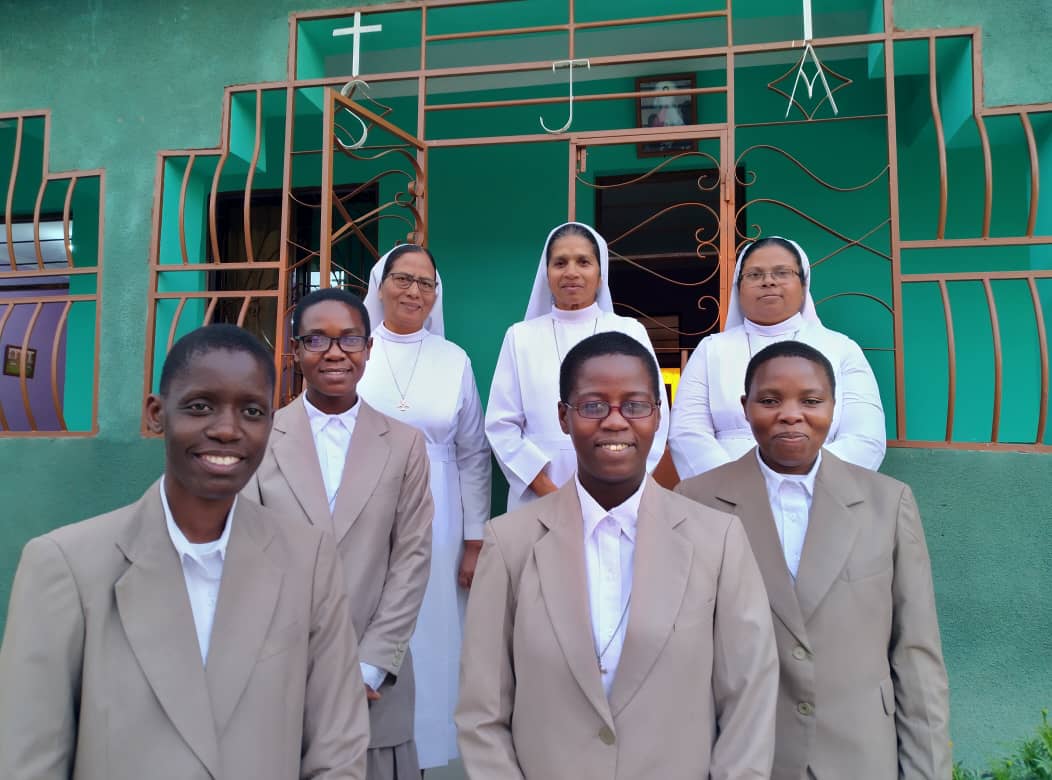 The Lord is good all the time.

The Lord is good all the time. 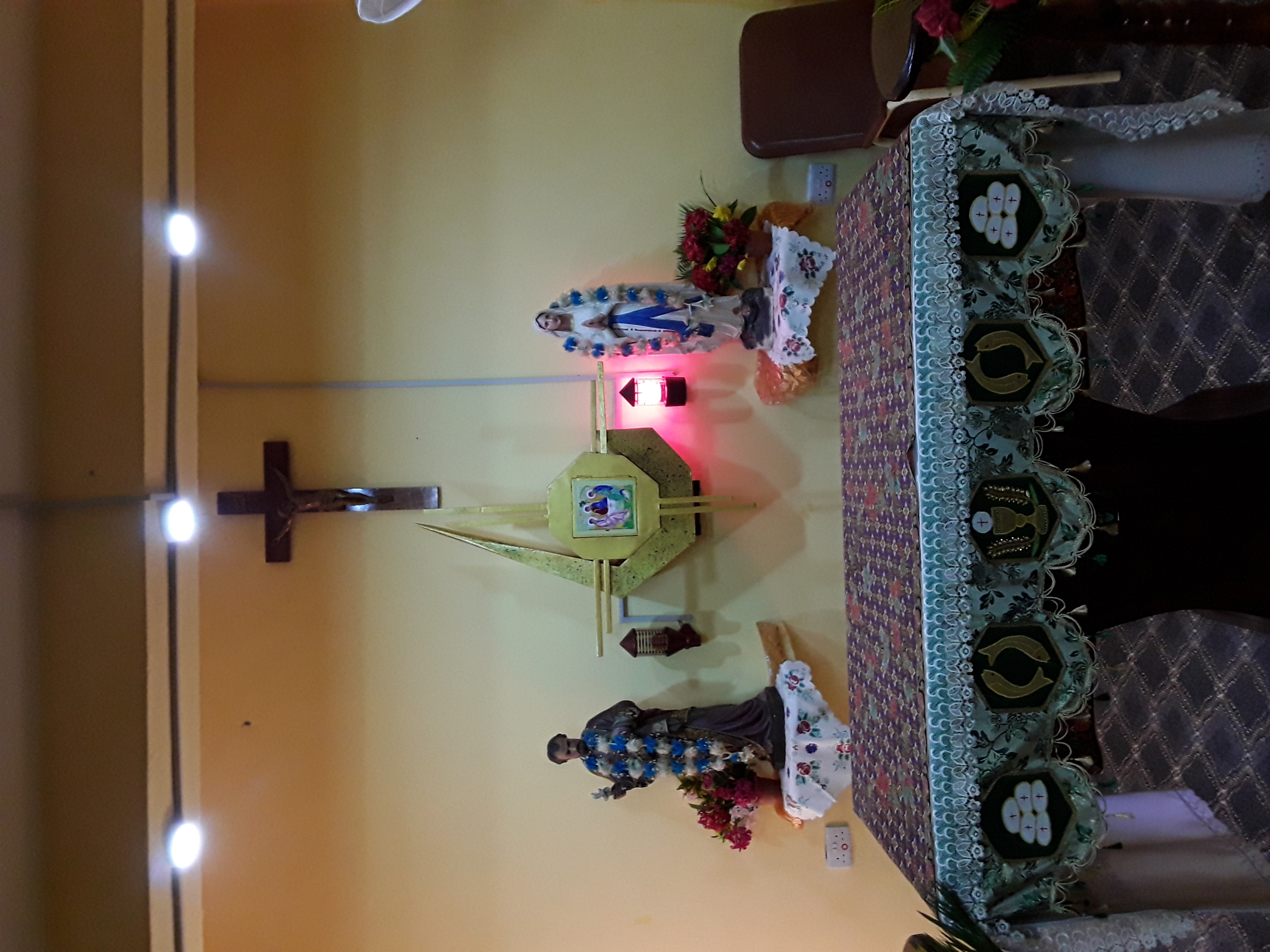 “Unless the Lord builds the house, in vain is the hard work of the labourers” Ps: 147.

On 14th May 2022, there was joy and excitement in every corner of Dumila community to tell stories of God’s blessings with gratitude for the wonders of God in the life of the Mission Territory. After a long-awaited renovation of the Dumila community, the first house in Tanzania with better living accommodation is prepared to welcome the sisters of the Mission. On that auspicious occasion, our joy was doubled with the presence of our sisters from different communities near and far, Parish Priest and community and the FCC sisters from Dumila. It was a family gathering to thank God for the loving care and protection during the 5 months of life.

On that day our house had a magnificent look with a serene climate outside. At 5.30pm our Parish priest Rev. Fr. Thomas Kochuparambil and Assistant Rev. Fr. Kenneth Myna began the ceremony with the blessing of the house while sisters kept on singing the blessing hymns. Followed by a Solemn Eucharistic celebration presided by Fr. Myna. A short introduction gave an official opening sense to the blessing. All the sisters shared the intercessory prayers for the church, Congregation and the world at large. The Sisters and Co-workers joined in singing in both languages English and Kiswahili the local language which gave more meaning and joy to the celebration. 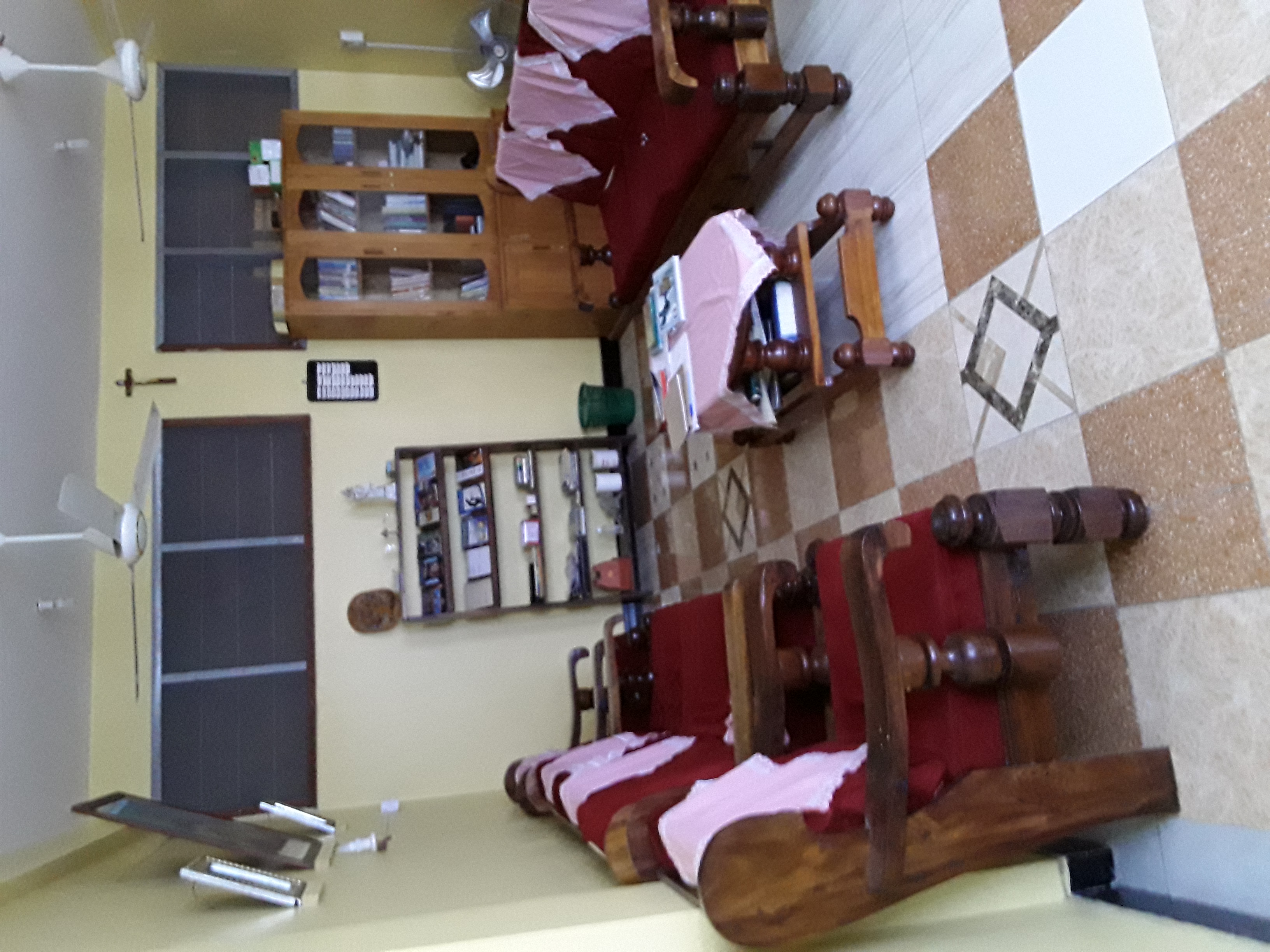 From the Eucharistic celebration we moved to a fellowship meal with singing and dancing. The cake was cut and shared by all. A delicious meal was served which cheered everyone. The stories of renovation work, the experience of God’s protection etc. were shared during the meal. Everyone had something to share to enjoy the meal, the joy and laughter were heard in every corner of the house. The celebration went on up to 9pm and memories of the gathering reached the climax with a group photo.

Though we faced many challenges and inconveniences during the renovation, our hearts were filled with gratitude for God’s unconditional love and the continued protection of Our Patron St. Joseph. The hard work of the Sisters and Co-workers were well remembered and appreciated to make the day a memorable one. We raise our hearts and minds to God and to all our Sisters who joined from different communities to make this day as a family celebration. We also thank all the sisters of Dumila community for the untiring work done, the sacrifices they went through to give a facelift to the Mission and the community. 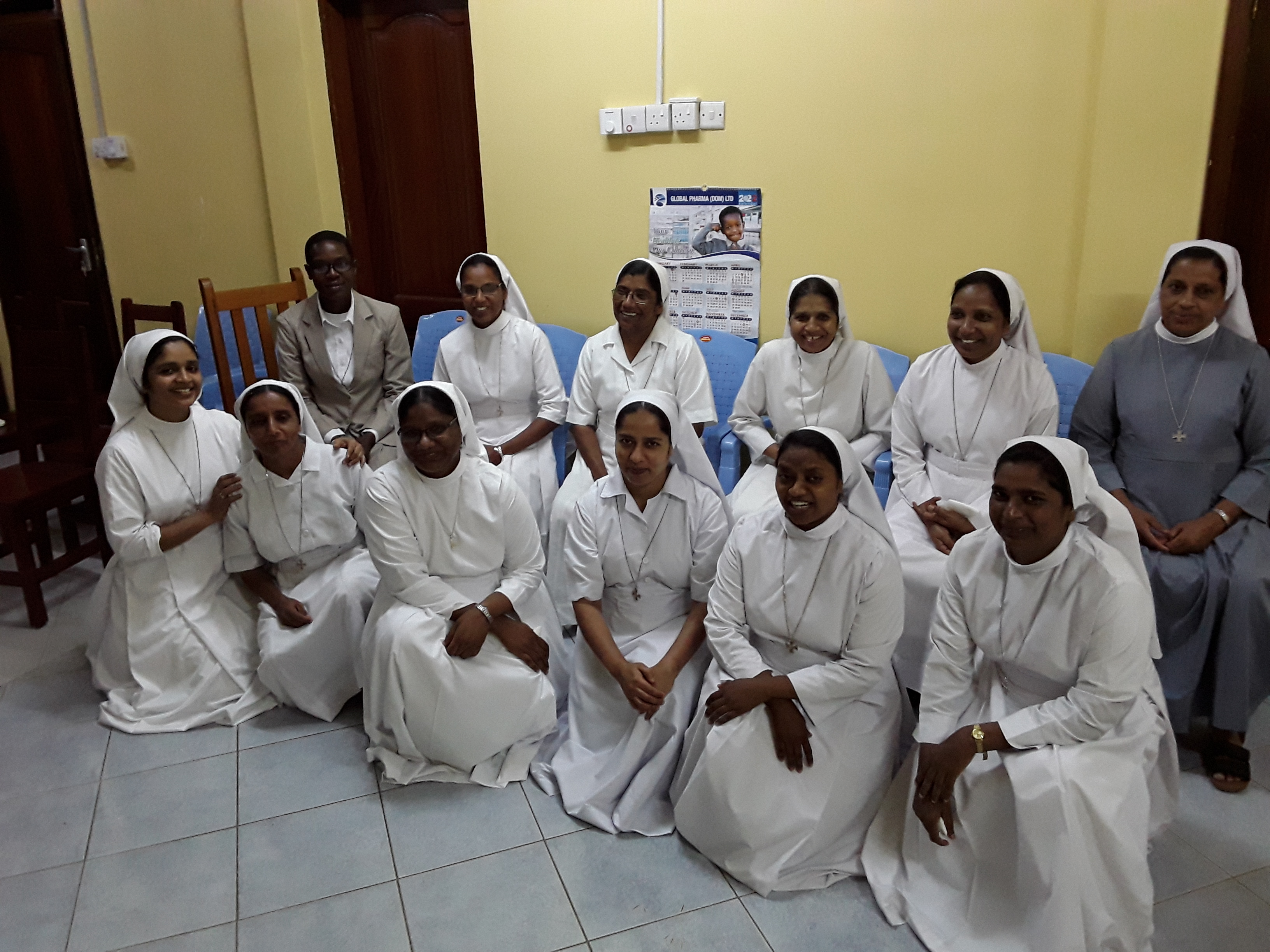