The recent Regional Conference on Migrant Workers with Asian realities was the third in the series of the meetings that dealt with the issues on migration.

The September 9-11 meeting focused on the Asian context with the theme of “Migrant Workers: An Asia-Pacific Experience.”

The response of the 161 participants for this conference was overwhelming. The richness of the insights, wisdom and experiences of the resource persons, speakers, the enthusiasm and participation of all the participants joined in making the event successful and memorable which fulfilled the primary goal of this event, namely, providing the space for conversation among us around the issues of migrant workers and internally displaced persons due to corporate, conflict, environment and poverty.

The Sisters of St. Joseph are present in 22 of the 29 Indian states. We are committed to integrate our decisions with the outcome statement from this conference and will work with it.

Our members realized that we have a greater responsibility in our constituencies. Many of them expressed that the conference was very educative and informative. It was challenging to some because for many it was a new topic since India denies that we do have migrants and Internally Displaced People (IDPs) in our country - but in reality nearly 2.4 million people are internally displaced in India alone

According to the report of UN by “Internal Displacement Monitoring Centre,” the conflict, violence and disaster caused 31.1 million new internally displacements in 2016

My sisters were very grateful to the organizing committee for this timely conference in bringing the issue alive and creating the opportunity to connect the grassroots realities with such international organizations as the United Nations. We hope that, as many requested, there will be an opportunity for a follow-up conference in the near future.

The many positive feedbacks we have received from respective participants also confirmed the success of the event and affirmed a call for bold commitment needed for further collaboration and not competition.

The hope was that the outcome of this workshop would enhance our advocacy at the global policy processes within the UN system. The UN negotiations on Global Compact (Safe, Orderly and Regular Migration) and the 2030 Agenda’s robust and ambitious dream, ‘leave no one behind,’ cannot be met without its realization for all, especially vulnerable populations of migrants and refugees, those of irregular and undocumented status, whose living conditions, human dignity and human rights are neglected by prevalent development and other social policies.

The drafting committee is at work with a statement which will be circulated soon and will be a working document for the participants for finding a way forward. The statement should help us in realizing the other significant goal of the conference, namely, to deepen our individual knowledge of the issues so as to strengthening our response at the grassroots; to understand migration and migrant workers in global and Asian contexts; to develop a deeper understanding of the policies connected with migration and migrant workers in Asia; to promote and strengthen collaboration and networking at local, national, regional and global levels.

A report on this conference was also published in Global Sisters’ Report (http://www.globalsistersreport.org/news/ministry-migration/faith-based-groups-address-migration-issues-asia-pacific-region-55408) 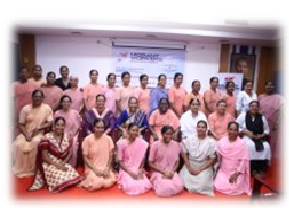