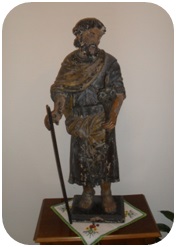 Since the announcement of the sale of the Mother House and the subsequent emptying of the property, the Generalate has become a place of refuge for many of the Congregation’s “precious” items – some of which date back to 1835, when the Sisters first moved to 10, Place au Bois. It is hoped that eventually it will be possible to use the Choir and Mother House Chapel in some way in order to create a “heritage” or “living history” centre. When this happens, some of those precious objects will form part of the exhibition, but until then they will remain in “Fontbonne.”

The arrival of the old weather-beaten statue of St. Joseph which had stood in the niche in the cloisters near the sacristy door, together with a plaque commemorating the one hundred and fiftieth anniversary of the Congregation in 1983, led us to question its history. Was there a relationship with the plaque? Its appearance suggested that the statue was much older. Some Sisters had heard stories but no one seemed very sure of its provenance.

The discovery of a painting behind a picture of Annecy in the Television room helped us find the answer. A gentleman had purchased what he thought was a painting of the lake and the mountains but when he came to collect it, he found that it was in fact, a poster, behind which was an oil painting of the martyrdom of the Sisters in Privas during the French Revolution. There were many questions regarding the identity of the painter. As it was difficult for the Sisters to remove the painting from the wall without professional help, it was impossible to ascertain if it was the work of Sr. Magdalene Wallace who, it was maintained, always put her name on the back her paintings. Once again, Sisters proposed a few theories, based on the anecdotes they had heard in the past. Inquiries were made in both the Province of France and the English Province and it was suggested that the book, “His Mercy is from Age to Age”, by Sr. Michael Joseph Bourne, which had been published in 1983, might be a useful resource. It was while looking for clues regarding the painting, that the solution to the “mystery” regarding the statue of St. Joseph was uncovered.

Sr. Michael Joseph had recounted the founding of the Sisters of St. Joseph in 1650 and the events which followed, as well as the history of the Congregation of the Sisters of St. Joseph of Annecy. We read that Mother St. John had been asked to send Sisters to Evian in 1822 in order to open a school. They had been given possession of a property which was in a very bad state of repair as it had been confiscated from the Friars Minor of the Observance – otherwise called “Cordelier” – (Grey friars), in 1793 during the Revolution. Sister tells us that a wooden statue of St. Joseph had managed to escape destruction and had come into the possession of the Brothers of Christian Doctrine who were teaching in Annecy and surrounding areas at the time the Sisters moved into the Mother House in 1835. They decided that, since the Sisters now owned the property at Evian, the statue of St. Joseph was rightly theirs, and they had the “happy thought” to present it to the Sisters of the Mother House as a gift to mark their first Christmas in their new home.

It was placed in the garden but because it was showing signs of deterioration, it was moved in 1933, the centenary year, to the niche in the cloisters where it was to remain for eighty three years. Sr. Michael Joseph recounts that a new statue was erected in its place in the garden. The “Cordeliers” St. Joseph continues to keep a watchful presence over his dear Congregation just as he has for the last one hundred and eighty two years – but now he is safe and warm indoors – close to the door of Sr. Pauline’s office!

Sr. Magdalen, nee Mary Winefride Wallace was born on 7th October 1873 in Mount Vernon, New York, USA. After her father’s death Mary moved with her mother to England. Two outstanding events in her life were her conversion to Catholicism and her entry into Religious Life. The process of her conversion took many years and on 4th September 1901 she became a Catholic. Eight years later she entered the Novitiate in Annecy – returning to England at the end of her period of formation.

Sr. Magdalen was in community in Clifton and then went to teach in our High School in Newport. Highly gifted as an artist, her paintings were to be seen at the Mother House and throughout the English Province. In 1933 Sister painted pictures of the Way of the Cross for the Chapel at Stow Hill, Newport. They remained there until the community was closed in 1977. At that time a request came from India for a Way of the Cross for the church in Parvatipuram and so the paintings were sent there. We in the English Province were delighted to share in this way. 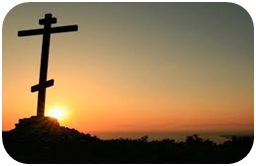