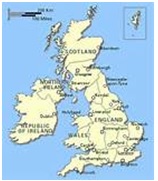 News from Tŷ Croeso about the Refugee Project.

Many of you may be asking what has happened about the Refugee Project. In fact, lots of things have been happening in the background; lots of liaising with those running the project, checks, matching of befrienders, referrals and visits to the Sanctuary Project. Tŷ Croeso has also hosted two Training Sessions for the befrienders.

However, we live in an "instant society," and things have been slower moving than anticipated - maybe the Lord is asking us to be more in solidarity with the Refugees. Everything for them has moved very slowly; waiting to come to the UK, waiting for housing, waiting for referrals, waiting for their cases to come before the courts etc. etc.

The first group of Refugees came to Tŷ Croeso on Wednesday 12th October. They shared a meal with the befrienders, did a tour of the grounds and shared some of their stories. A different group came on Wednesday 19th October and were engaged in similar activities. Sr. Alice, Sr. Vincent, Sr. Madeleine Sophie, Sr. Brigid,

Sr. Visitation, Sr. Jerome, as well as the Tŷ Croeso Team, were all involved in hospitality and the befriending process. One Sister felt that a shift in the togetherness arose from a discussion about where individuals had come from and that it would be helpful to use a large map to identify the areas of origin. Further discussion led to some of the refugees sharing favourite recipes from their different cultures. They expressed the desire to prepare food from their different countries to share with the befrienders. With this in mind, it is hoped that the next time we meet we will go to the Bethel Centre in Newport, where Dylan Moore is keen on the Refugees hosting the befriending.

It was a very fruitful and moving experience for all concerned. Thanks to all who have supported this project and especially for your prayers. 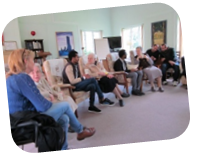 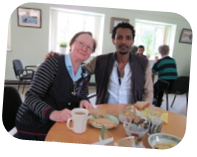