Centenary of the Archdiocese of Cardiff

The day began with a concelebrated Mass. 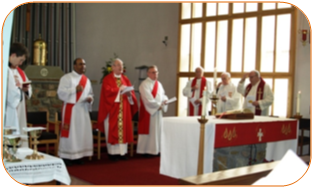 In his homily the Archbishop paid tribute to the role of the many priests, deacons and religious who have served in this area of Wales during the last one hundred years. After Mass, the Archbishop outlined some of the challenges facing the Archdiocese in 2016, noting particularly the shortage of priests who are available for mission. At the same time, His Grace also noted the signs of hope - five seminarians and a permanent deacon who will hopefully be accepted for priestly ordination. There is also male religious Congregation from France who may at a later stage come to Wales to minister in this area. It was good to hear of new shoots in this centenary year.

Following this, all enjoyed the hospitality of the Abbey at a beautifully prepared buffet meal. This gave everyone a chance to chat and renew acquaintances.

In the afternoon, Dom Christopher Jameson, OSB, gave an engaging talk on mission and evangelisation, using examples from his work within the Benedictine Order, as well as on the National Vocations initiative. He stressed the need for active and conscious evangelisation and, in particular, the role of welcome and hospitality as the starting point in that venture.

Sr. Josephine Egan, Daughter of the Holy Spirit, thanked His Grace for arranging the day and the Sisters at Llantarnam Abbey for hosting it. It was a happy occasion which was much appreciated by everyone. 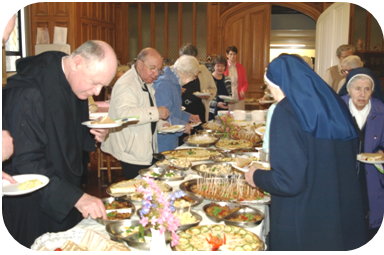