Wakro is a small town situated at an altitude of 686 metres from sea level consists of 56 villages in the state of Arunachal Pradesh. It has a population of 4745. These villages are small and spread out quite far from each other. The town as such is very small with four to five grocery shops, some clothes shops, a few vegetable shops, a medical shop and three wine shops. There are three or four other shops selling stationery and gift articles, a hairdresser’s shop and four tea shops. 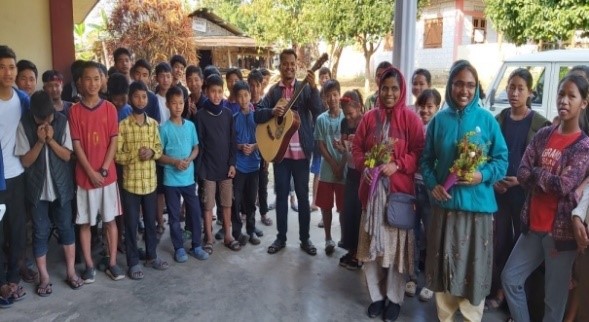 The electricity supply is better at night, than during the day. The mobile phone networks are good now. The road between Wakro to Tinsukia – the main town in the area, at a distance of 150 km - is good. It takes 3 to 3.5 hrs from Tinsukia to Wakro. Every day here are two buses from Wakro to Tinsukia and back. At times the road will be blocked due to landslides in the rainy season.

The people of Wakro are Mishmies. They are rather small in stature, with flat broad faces and strongly Mongoloid appearance and they have their own languages. Many of the clans seem to have migrated from Burma and there are also Tibetan refugees. Except for the Mishmies who are other people in the area practice Buddhism. The men and women are addicted to tobacco and to opium.

The number of houses are on the increase. Most of the people in the neighbouring villages have land at Wakro and are thinking of moving to Wakro and others are trying to get a plot of land at Wakro so that they can come and settle down in future. The school that we are working in was started in 2010 by the Congregation of Don Bosco. As Wakro is very sparsely populated, and as there are hardly any good schools in the whole of Anjaw district, the desire for a well-run hostel facility for boys and girls is inevitable. 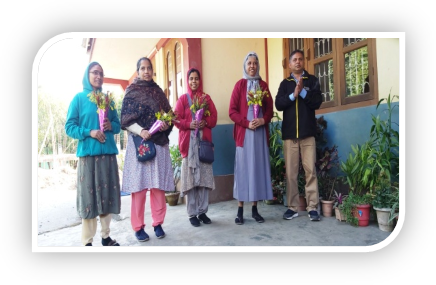 Apart from a few rich and affluent people of the locality, who are either government employees, politicians or businesspeople, most are in a very poor financial situation. There are hardly any employment opportunities in these districts as there are no major businesses or industries. The people largely depend on farming and agriculture. The land they occupy requires huge manpower to clear it and make it ready for crops to grow. Therefore, much of the land lies uncultivated even though the land is very fertile. The life of the tribal people of Arunachal Pradesh has changed drastically for the better in the last 20 to 25 years because of the literacy and education opportunities brought in by the Christian missionaries.

At the invitation of the Provincial of Don Bosco fathers, and having been given the necessary permission, Sr. Rose, Provincial Superior, Sr. Mary, Provincial Councillor along with Srs. Texy Mathew and Rani Joseph began the journey for the new mission on the 5th of February 2021. We travelled from Visakhapatnam to New Tinsukia, to our first Mission in the North East, by train. We reached Tinsukia on 7th February. We were welcomed by Fr. Rector and having refreshed ourselves at the Don Bosco house we left for Wakro which was a 3-hour journey. When we reached Wakro we received a grand welcome by the priests, teachers and students.

The next day Srs. Texy Mathew and Rani Joseph went to the school. During the school assembly they were welcomed with their traditional shawls and a welcome song. The students are very loving and affectionate. The entire campus is delighted to have the presence of our sisters.

The 10th February 2021 was an auspicious day for us, Sisters of St. Joseph of Annecy, as we officially started our Mission under the guidance and protection of St. Joseph. We had a solemn Mass in the evening with Fr. Nebu the Bursar who represented the Don Bosco Provincial team. After Mass we had another official welcome in the form of entertainment arranged by the priests in the school. Sr. Rose gave a beautiful message of the vision of our founder Fr. Jean Pierre Medaille whose desire for his daughters was to serve the poor and the marginalized. After the programme we had the cake cutting ceremony and a delicious meal.

We began our mission earnestly by taking Catechism classes for the students, preparing them for their First Holy Communion, supervising their study periods, teaching in the school and visiting the local villages.

We thank Almighty God for His countless blessings on each of us. We also seek the intercession of St. Joseph that we may bring many more souls closer to Jesus.